Euporia Rituals in ancient Greek Tragedy (RAGT) is an ongoing project for the creation of a browsable database of rituals and religious facts in ancient Greek tragedy. The project is the result of the cooperation between the Laboratorio di Antropologia del Mondo Antico (LAMA) at the University of Pisa and the Collaborative Philology Lab of the Institute of Computational Linguistics “A. Zampolli” at the CNR of Pisa.

The annotation and the querying system were developed in order to offer digital support to Gloria Mugelli’s PHD Thesis, an historical anthropological research on the form and function of rituals in ancient Greek tragedy.

The results (database, tagset, ontology and search interface) are aimed to be published in open access.

EuporiaSearch – the prototype version of the search engine, with instruction for a demo query, are published on www.himeros.eu/euporiaRAGT 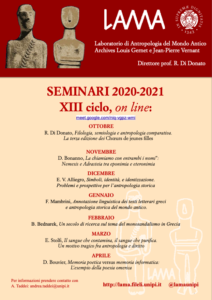